The rain and fog have cleared at the Champions Tennis Center to allow all college tennis players across Hamilton County to participate in the district’s annual tennis tournament.

There were nearly 100 college athletes competing fiercely to represent their schools. The women’s singles title was won by Brooke Martin of Signal Mountain. Miss Martin had to defeat her own teammate Kate Gilbert to win the title. The boy’s singles title saw a similar situation. Hixson’s Jax Rogers won the boys’ singles title by beating his own teammate Campbell Inman. The women’s doubles title was won by Allie Smith and Savannah Cummings of Signal Mountain. They played a tough game against CSAS Madeline Hayward and Sarah Porterfield. The AAPC men’s doubles team won the men’s doubles title. Andrew Rice and Henry Spann represented the CSLA. They defeated Brian Dunn and Ryan Spencer of East Hamilton in a very close game. Ultimately, all coaches have a desire to include more schools and more athletes in the wonderful game of tennis. We hope that these student-athletes will continue to play tennis for a lifetime of fun.

Each coach is responsible for nominating All-County players. The number of players from each school is determined by their rank after facing everyone on their side of the district. Tennis is divided between west and east. 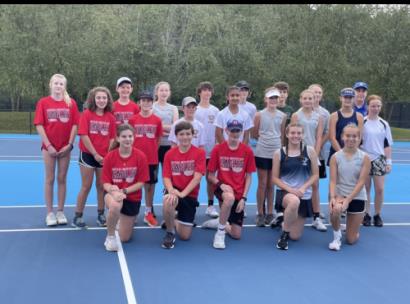